The History of Willow Run

How Willow Run Country Club came to be:

Dr. E.H. Stumme and Paul Buenneke walked in to Ernest Griese’s cow barn back in the late 1960’s on behalf of some citizens looking for some recreational facilities, and Willow Run Country Club is the result of their efforts.

“When Doc Stumme indicated a group of people wanted my farm for a golf course and would buy me another one, I told ‘em I wasn’t interested,” said Griese.

Learning later while getting a haircut at Duane’s Barbershop the group was now interested in 40 acres Charlie and Louie Knief owned south of town, Griese was open to discussion. Half of the Griese Farm was then non-tillable, used primarily for grazing cattle. If the committee wanted just a 65-acre site for a 9-hole course, Ernest had some land available. “My son Loren was drafted for the military in 1967 and plans for a family operation that would include dairy, sort of went down the drain,” said Griese. The sale had to be approved by not only Ernest but his sisters Elda, Elnore, and Edna, left in charge of a group estate established by their parents John and Caroline in 1959.

“Denver and Tripoli were the last communities in Iowa to qualify for an FMHA loan to construct a golf course,” said Buenneke. Several meetings were held, a Waterloo architect hired, and an East Dubuque construction company located, to meet all he federal guidelines necessary for course construction and loan approval. “We just tore out the fencing and went to work,” said Roger Thurm. “The present practice area was nothing more than a bog.”

Wendall Matthias’ tractor was mired down a few times as brush and ground was tiled and reshaped, while Roger Donaldson and Thurm scoured the countryside securing the membership needed to gain loan approval.

“We took a ton of trees out along a 40 to 50 foot strip on either side of the creek,” said Don Buck. The area was chock full of trees and brush interrupted by an occasional cattle trail as the group shaved off hills and laid $4000.00 worth of clay tile to recapture the land from swamp like conditions.

Like any good effort that consists of mostly volunteer efforts, some setbacks were encountered. “The contractor digging tile lines hit a natural gas main which roared for a good day before it could be capped,” said Thurm. Parts to repair the line had to be flown in from Omaha, but enough gas flowed through the main to keep pilot lights lit around the community.

Willard Mohling and his crew were depositing lime rock in some stormy weather to complete the parking lot when a bolt of lightening struck nearby. “While the lack of hair on his head isn’t a result of that lightening, his eyebrows got singed a little,” chuckled Buck.

Truck loads of trees from Meyer’s Nursery in Waterloo and sod cut from the Oltrogge Farm just north of the 3 & 65 intersection, brought the course to the final stages of development. The remaining ground was seeded on September 28, 1969 and after constant mowing with near perfect weather conditions and light rains, Willow Run was ready for play in June of 1970.

While opening day was one of poor weather, and Doc Stumme reportedly had some problems executing a solid wood shot, the venture has proven to be a successful addition to the Denver area. Over the years the holes have been renumbered and course mangers have come and gone, but the facility has continued to have a reputation as “one of the nicest nine hole ventures in Iowa.”
Today, Willow Run enjoys a 200 plus membership. 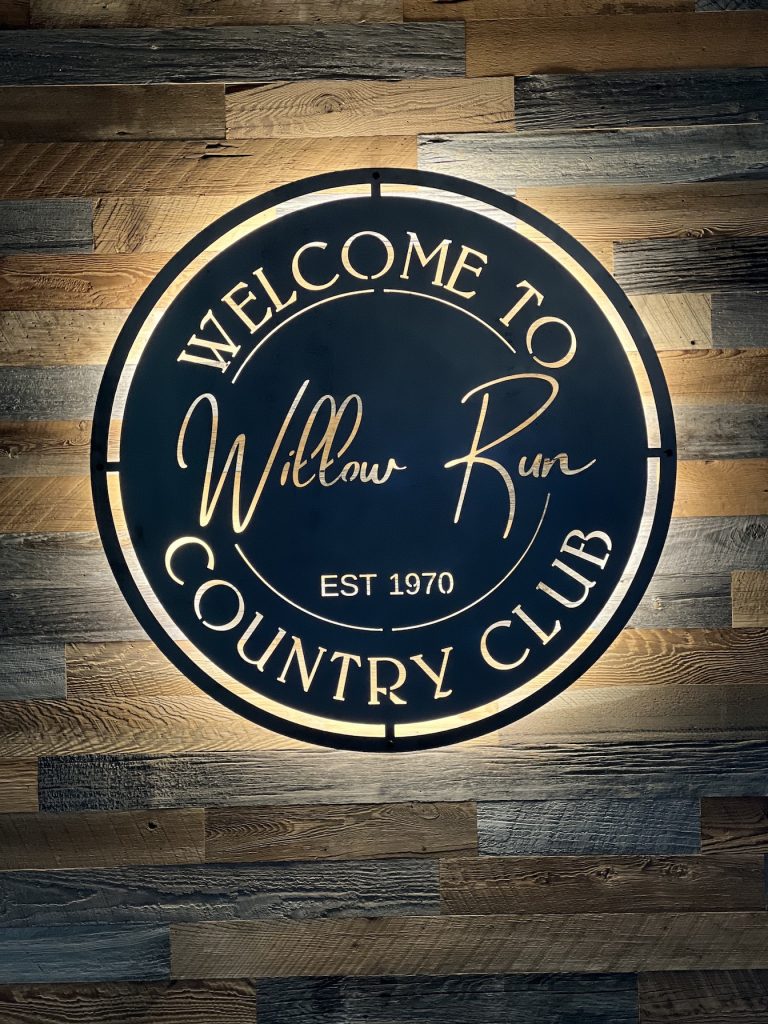